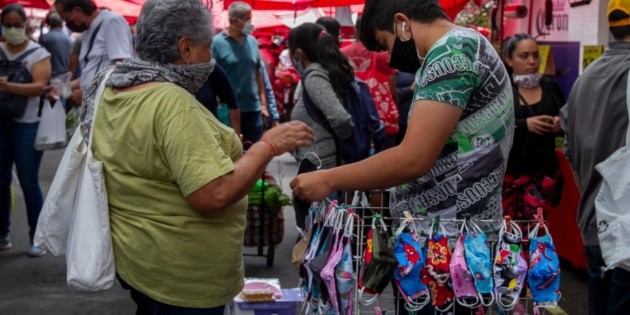 Inegi: Informality in Mexico falls to its lowest level in 18 years


The National Institute of Statistics and Geography (Inegi) announced that the informal economy in 2020 represented 21.9% of the Mexican gross domestic product (GDP), so its level is the lowest recorded in 18 years.

The 2020 data, amid the COVID-19 pandemic, represents a reduction of 1.2 percentage points compared to 2019, when informality represented 23.1% of the national GDP.

“Due to the pandemic and the consequent confinement and decrease in employment, the informal economy participated with 21.9% of the national GDP, the lowest value in the history of this series”, highlighted Julio A. Santaella, president of Inegi, who ends his term at the head of the institution at the end of this month.

The gross value added (GVA) of informality reached more than 2.4 trillion pesos in 2020.

Retail trade represented 40.5% of the value of the informal economy in 2020, followed by construction with 25.7%, manufacturing with 13.9% and the rest of other items.

The measurement considers within the informal economy the informal sector and economic units constituted by micro-businesses that do not have the basic legal records to operate.

It also includes Other Modalities of Informality (OMI), such as agriculture, paid domestic service for households, as well as all the varieties of work that are in formal economic units, but work without legal protection.

According to preliminary figures from Inegi, the contribution of informal GDP was generated by 55.6% of the employed population in informal conditions.

While the remaining 78.1% of GDP was generated by the formal sector with 44.4% of the formally employed population.

The proportion of informal workers within the total employed population went from 56.5% in 2019 to 55.6% in 2020, a reduction of almost one percentage point.

The Inegi data are a reflection of the COVID-19 crisis, that has left about 297 thousand dead in Mexico, in addition to a historical contraction of 8.2% of GDP in 2020.

At the peak of the health crisis, in mid-2020, Inegi documented the exit of more than 12 million people from the labor market, which explains the fall of the informal economy.

The unemployment rate in Mexico stood at 4.2% of the economically active population (EAP) in the third quarter of 2021, above the 3.7% of the same period of 2019, before the pandemic.