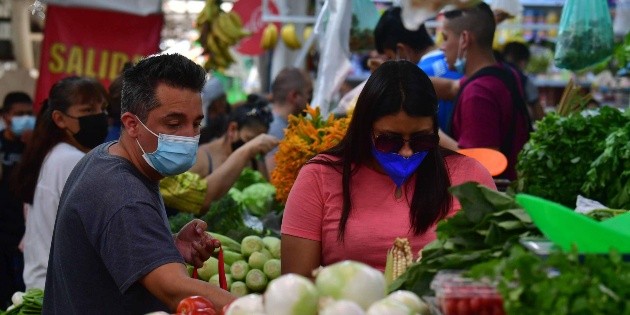 AMLO announces another “Who’s who in prices”


President Andrés Manuel López Obrador (AMLO) announced this Thursday a new section of “Who’s who in prices”, to be featured at their morning lectures.

López Obrador instructed the Federal Attorney for the Consumer (Profeco), Ricardo Sheffield Padilla, to prepare a “Who is who in the prices of necessities“, under the argument of avoiding consumer abuse in the face of higher inflation.

“One of the things that I mentioned to the Secretary of the Treasury -Rogelio Ramírez- is that just as we make known ‘who is who in fuel prices’, we are also going to report on’ who is who in the prices of items staple ‘and it will help a lot, “he said at his morning news conference.

“I inform you, Ricardo Sheffield, so that you prepare yourself. When he has information to see who is abusing, who is advantageous and who is acting with increases adjusted to the market situation.”

The inflation rate in Mexico was last November at 7.37%, its highest level in more than two decades, after an increase in prices in the eleventh month of the year of 1.14% compared to the previous month, according to Inegi data.

The President called on distributors and merchants not to increase prices, “not to abuse in this circumstance that we are facing.”

He said that in a talk he had yesterday with the Secretary of the Treasury, he told him that he would talk with the president of the Business Coordinating Council, Carlos Salazar Lomelín, to raise the issue with him.

However, he clarified that not all businessmen or merchants act abusively, while reminding that inflation is a phenomenon that is occurring throughout the world.