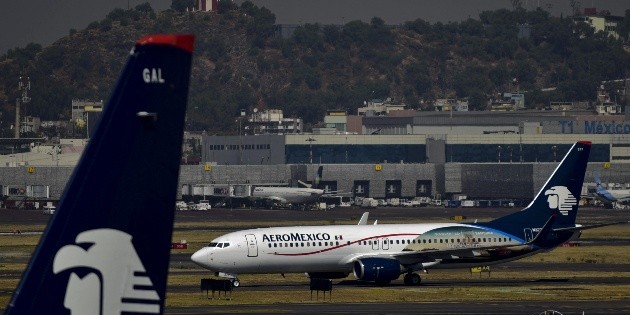 
Aeroméxico suffered a historic crash on the Mexican Stock Exchange on Thursday, after it announced the holding of a Public Offer of Acquisitions (OPA) as part of its financial restructuring process and pending the resolution of the Bankruptcy Court in relation to its process under the Chapter 11.

The airline’s shares plummeted 76% during this day and traded at an all-time low of 90 cents, after closing yesterday at 3.69 pesos, according to information from Investing.

The titles have recovered part of the losses in the last hours and are exchanged in 1.82 pesos, which implies a collapse of 51% compared to yesterday Wednesday.

Aeroméxico Group reported that, derived from the approval on December 10 of the Disclosure Statement of the Joint Restructuring Plan of the airline and its subsidiaries, “a company not related to the company” will be initiating proceedings before the National Banking and Securities Commission and the Mexican Stock Exchange to carry out a public offer for the acquisition of shares.

Same that will be voluntary and would be carried out in terms of the article 97 and other applicable of the Law of the marketc of values, to give current shareholders an option to exit the capital stock prior to the capitalization of various liabilities in charge of Aeroméxico and its subsidiaries and new contributions to the capital stock.

The foregoing will substantially dilute the current shares of the airline upon exiting the Chapter 11. The offer would be made to one cent of peso, national currency, for each of Aeroméxico’s outstanding shares.

Delta Airlines will not attend the offer, so a maximum of 331 million 480 thousand 713 shares is expected to be acquired, which would represent, where appropriate, up to 49% of the capital previously for dilution purposes due to the implementation of the Plan.

These shares as a whole will represent less than 0.01% of the total future shares representing the company’s capital stock, given the dilution by capitalization of liabilities and new contributions of capital stock and eventual subscription by other shareholders and investors.

The offer would be liquidated and consummated after the date of celebration of the Investors Assembly and they will have full legal effects until the closing date and effectiveness of the Plan, that is, after the consummation of the offer.

In such a way that the shareholders who retain ownership of future shares representing Aeroméxico’s capital stock, after the effective date of the plan and the consequent dilution of the company’s current share capital, be certain of your expected shareholding.

Aeroméxico added that among the new shareholders in its Joint Restructuring Plan will be a group of Mexican shareholders with a 4.10% of the airline’s capital stock; Apollo with a 22.38% and Delta Airlines with a 20%; and the remainder distributed among all new investors and creditors who capitalize their recognized credits in shares representing the future capital stock of the airline.

The offer will be sponsored with funds received by the offeror, coordinated with Aeroméxico and subject to a schedule that allows the current shareholders of the airline to have the opportunity to dispose of their shares, through the stock market, prior to the restructuring plan being cash.