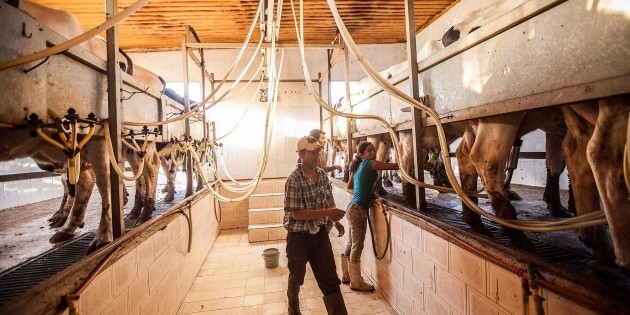 Per capita milk consumption, three times less than in the US


Mexico increased milk production 2.1% to 12 thousand 553 million liters during 2020, derived from the fact that the sector was declared essential to guarantee the supply of families, said Mariano Salceda Servín de la Mora, president of the National Chamber of Industriales de la Leche (Canilec).

With the increase in production compared to 2019, Mexico advanced in the world ranking of producing countries, ranking 13th; although consumption per capita remains lagging up to three times compared to the United States.

When participating in the plenary session of the National Council of Manufacturers of Balanced Foods and Animal Nutrition (CONAFAB), the executive said that the market for bovine milk and its derivatives in Mexico is valued at 16 billion dollars a year and it has ample growth potential.

Mentioned that daily consumption per 250 milliliter capita of Mexicans is low compared to countries such as the Netherlands of 900 milliliters, the United States 740 milliliters or New Zealand 600 milliliters.

For its part, in the same period, the demand for dairy products had a 2% reduction compared to 2019, due to the effects of unemployment and the economic uncertainty of the population, explained Mariano Salceda.

He added that of the national production of 12 thousand 553 million liters of milk that was reached in 2020, only 614 million are marketed unpasteurized (raw). Industrialized milk is sold mainly in fluid form and to a lesser extent in cheese, cream, butter and yogurt.

“The food security of the country is basic and depends on all the industries that participate in the agricultural sector: manufacturers of balanced foods, the slaughter and preparation of meats, dairy products, fruits, vegetables, sugars, grain milling, as well as fish and seafood ”, explained Salceda Servín.

The president of Canilec said that the sector has challenges to increase the consumption of healthy and nutritious dairy products, especially during the COVID-19 pandemic; improve the competitiveness of the entire sector in the face of the ups and downs of the commodities and achieve efficient management of the seasonality of dairy production.