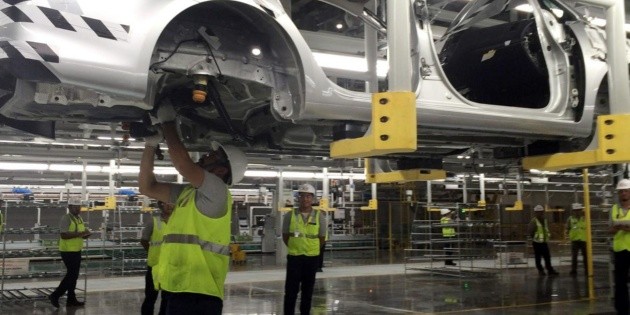 Mexico, two decades behind the US in auto industry wages


In the best scenario, It will take 21 years to grow Mexico’s wages to match their counterparts in the region, but by then, the auto industry will no longer exist as we know it, the digital revolution will have reached it, and robotics will have replaced any advantage of location factors based on labor costs, reveals the study “T-MEC. Likely Scenarios for Labor and the Regional Automotive Industry ”presented by the Friedrich Ebert Stiftung Foundation (FES).

With the entry into force of the T-MEC, in July 2020, the automotive industry was positioned as a fundamental piece of the negotiations and currently in the construction of scenarios on its impact in the region.

During the presentation of the document, in a webinar, Alex Covarrubias Valdenebro, its author, highlighted the fact that although the T-MEC has as one of the main objectives to guarantee a better work balance in North America, this does not happen, since there are a new geography of employment; indicated that only 1.2 million people are employed in Mexico, that is, it is the largest number of jobs in the industry in the region. He assured that the United States only has 14% of its production, while the remaining 86% is distributed throughout the world.

Argued that the industry uncertainty scenarios regarding the T-GUYThey are going to favor Mexico, because corporations always play it safe; and our country grants that certainty to investors in the automotive industry. He stated that the cost of the transition in the automotive industry derived from the T-MEC is enormous; Added to the costs of the COVID-19 pandemic, they make it impossible for a corporate to do it by itself, so the labor ecosystem becomes transnational, since unions have to think and socially dialogue beyond borders.

For his part, Alejandro Rangel, union leader of the Union of Workers of the Metal-Mechanical, Automotive, Similar and Related Industries of the Mexican Republic, highlighted that, although the automotive industry in Mexico has done better than other industries in the country already, Mexico compared to the US and Canada, the disparity in wages is important.

He detailed that In Mexico the salary in the automotive industry is between 2.3 to 2.6 dollars per hour, in contrast to between 25 and 29 dollars per hour in the other two partners of the T-GUY; highlighted the changes brought by the labor reform with respect to democracy and freedom of association.

Graciela Bensusán, who is also a panelist to resolve conflicts in the framework of the T-MEC, assured that there is an optimistic vision in the sector despite the fact that it has not been able to articulate innovation and the productive success of the industry with progress. social of the people who work in the sector.

He added that as a result of the trade agreement, a transition bridge has been created between an old and a new labor model; the first with corporatist characteristics, labor peace and no strikes to one based on freedom of association, collective bargaining, democracy and transparency that is constituted with institutions of internal and external visibility.

We use cookies to ensure that we give you the best experience on our website. If you continue to use this site we will assume that you are happy with it.Ok